Sep 1, 2021 Pastor disgraced and forced to marry fiancée's corpse after she died when he allegedly aborted her pregnancy without her consent to save face 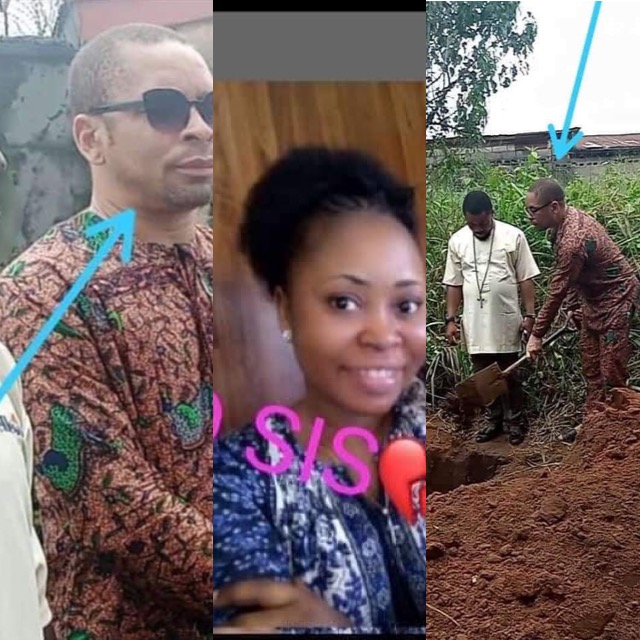 A pastor was forced to marry the corpse of his late fiancée who he is alleged to have killed by carrying out an abortion on her while she was unconscious.

Rev Dr. Sucess Emeka Sunday, who owns the church, Life Transformation Praying Ministry, in Akwakuma, Owerri, started dating Chioma Okoye 5 years ago and they got engaged in 2020 and started planning their wedding.

Chioma, 32, soon became pregnant while wedding plans were underway but the pastor didn’t want the baby as his church frowns upon pregnancy before marriage and it would damage his reputation.

The family of the deceased claim that Pastor Sunday invited Chioma over on Feb 24, 2021, and gave her a drink laced with a drug and she became unconscious after consuming it.

He reportedly took her to a hospital and asked for a doctor to terminate the pregnancy. The doctor is said to have refused but the pastor allegedly insisted.

During the procedure, Chioma reportedly started vomiting blood and the doctor advised that the deceased be taken to FMC.

At FMC, Rev. Sunday allegedly registered his fiancée with a different name and then called her family to let them know she was ill.

Chioma reportedly died before her family could intervene.

Wilfred Okoye, who released a statement on behalf of the family, said an autopsy showed there was a drug in her system and also showed that the pastor had allegedly tried to perform an abortion on her by himself while she was unconscious before eventually taking her to the hospital.

After being presented with the autopsy result, the pastor is said to have confessed to drugging her in order to terminate her pregnancy.

The family of the deceased made the pastor marry Chioma before her funeral.

She was buried on Tuesday, August 31 in Umuahia, Abia.

Her name on her obituary poster was changed to include the pastor’s name as a sign that he had married her.

A statement released on behalf of the deceased’s family reads:

Mrs.Sunday Chioma Success Was Born in The Year 1988 To The Family Of Late Mr.Joseph And Mrs.B.N Okoye Of Amanato Ihitte-Owerre in Orlu L.G.A.She Went To Ikenegbu Layout Primary School, Girls Secondary School Akwakuma And University Of Nigeria Nsukka.
Till Her Death She Has Been The Manager Of Avant Global Bizness Center World Bank Ow.

She Met The Husband Rev.Success Emeka Sunday in a Program And They Agreed To Be Husband And Wife Declaring That God Had Shown Her (Rev.Success.E.Sunday)Whom To Spend The Rest Of Her Life With, After Declaring His Interest To The Deseased Family, They Started Planning And Preparing For Their Wedding Starting From Going To Market Survey And Putting Every All Other Things in Place But When He Learnt That She Was With a Child,He Cunningly Rejected The Pregnancy Saying That The Church Will Frown At It And Also His Image Needed To Be Protected Being a Man Of God And a Founder Of His Church Life Transformation Prayer Ministry.Being in Unconscious State She Was Dragged To The Hospital By The Said Husband But The Information Gathered By The Doctor is That The Husband Had Tried To Remove The Pregnancy On His Own But Couldn’t Before Bringing Her To The Hospital But Rejected The Advice Of The Doctor That it Could Be Risky,He Asked The Doctor To Go Ahead Because Of His Image Dear People Of God To Cut The Whole Story Short Things Were Damaged After Done And It Had Being a Case All These While, She Passed On The 24th February 2021 But Being a Christian Home/Family The Rev Pastor Success Emeka Sunday Pleased For Peace Which Was Granted, What More Can i Say. Let God Be The Judge in All These, It’s Well.
Adieu Nwa Nke Nta, Adieu Taata, Adieu Chi
Signed,
Wilfred Okoye (For The Family)